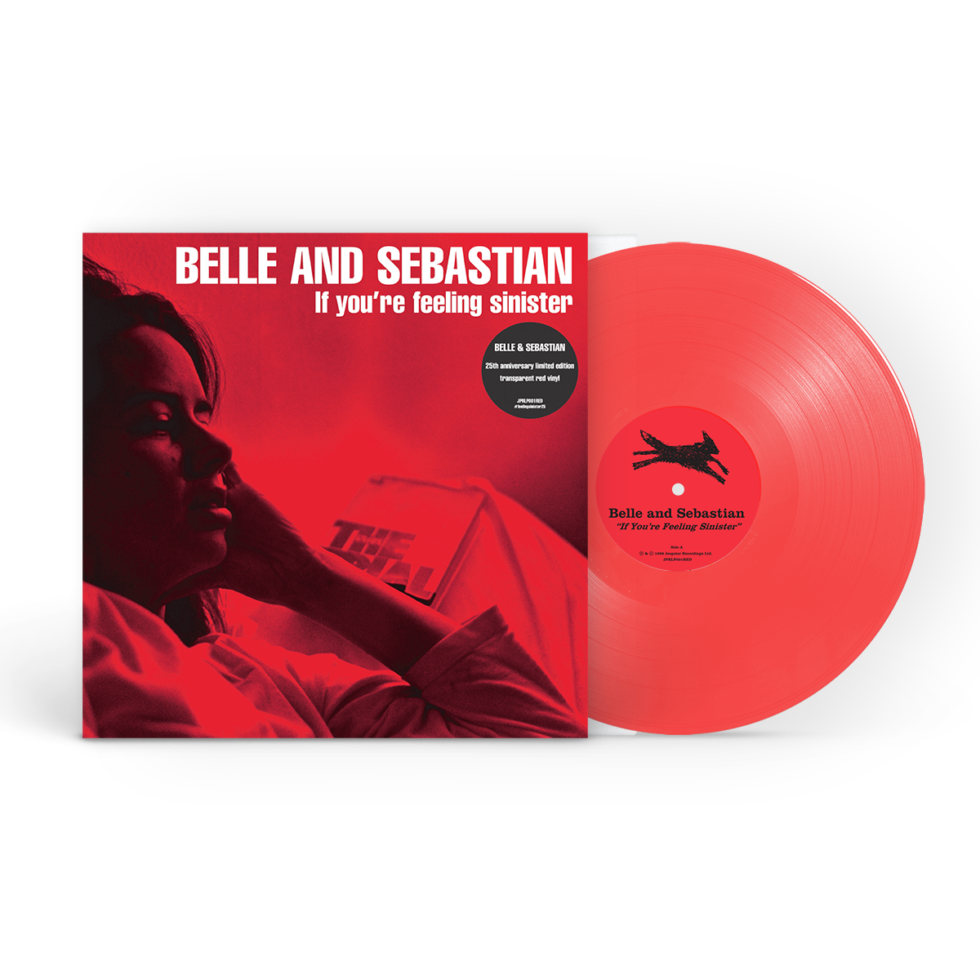 If You’re Feeling Sinister (25th Anniversary Edition)
Album: JPRLPOO1RED
Released: 13th December 2021
Buy Release »
Tracklist
Disc One
The Stars Of Track And Field
Seeing Other People
Me And The Major
Like Dylan In The Movies
The Fox In The Snow
Disc Two
Get Me Away From Here, I’m Dying
If You’re Feeling Sinister
Mayfly
The Boy Done Wrong Again
Judy And the Dream Of Horses
Release Info

Originally released on November 18th 1996, this seminal album is celebrating its 25th Anniversary this month.

The album was recorded in Glasgow at CaVa Studios in August 1996 over just 10 days and was the first album released by Jeepster.

There were no singles released from the album which was a famous Belle & Sebastian trait of the time. In line with this, there were also no interviews given and promotion involved a three gig tour over London, Manchester and Glasgow.

For the recording of this album, the band consisted of the six original members but this time also included Sarah Martin as the seventh member in her debut for the band. This was the second album released by Belle & Sebastian and all songs were written by Stuart Murdoch. The full line-up was Stuart Murdoch, Isobel Campbell, Stuart David, Stevie Jackson, Richard Colburn, Chris Geddes & Sarah Martin.

The session produced 11 songs of which 10 made it to the album and the other became the single ‘This Is Just A Modern Rock Song’. Although there were no videos made for any of the album tracks, Sarah Martin recorded a video for this eleventh track.

The album cover features Ciara MacLaverty, a great friend of Stuart’s, beside a copy of Franz Kafka’s ‘The Trial’. The inside cover features some members of the band with friends in their impression of The Last Supper.

‘If You’re Feeling Sinister’ received mixed reviews at the time of release: NME famously gave it 5 out of 10 and ‘… no gold stars’ in 1996 but Q magazine included it in their Top 50 albums of 1997 and The Guardian review gave the album 4 stars. The band went on to win Best Newcomer at the Brits in 1999 (to the very public chagrin of Pete Waterman and Steps who believed the award to be in the bag for them and told The Sun so) and in 2014 were presented with the NME Outstanding Contribution to Music Award.

This year the album has appeared in:

The album was originally picked up and played by Mark Radcliffe on his Radio 1 Evening Show in 1997 (the band also did their first radio session for him in July 1997) and John Peel included their first EP at No.12 in his Festive 50 that year.

An album of 10 sublime tracks, it is hard to choose any stand out tunes but we have chosen to lead with ‘Get Me Away From Here I’m Dying’ because it is a great representation of Stuart’s 1996 take on it all: ‘Nobody writes them like they used to, so it may as well be me.’